On Wednesday, January 1, 2020, USPSA’s Steel Challenge Shooting Association will implement new Peak Stage Times for these divisions as follows, with no changes to other divisions: 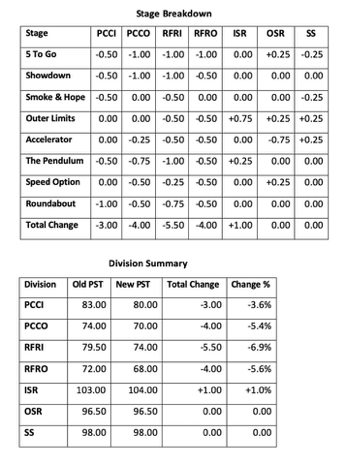 After the 2019 SCSA World Speed Shooting Championship, USPSA President Mike Foley, SCSA National Program Coordinator Zack Jones, and Jeff Jones, an experienced Match Director and avid competitor, reviewed all stage times from the larger tier 2 and 3 matches, including the last two World Speed Shooting Championships. The times were compared to the current PST’s to determine if any adjustments should be made. The review team attempted to initiate a gradual change in 2018, instead of moving directly to much higher PST’s, but the performance in some divisions is improving at a rate that exceeds the last two adjustments. PST’s were not adjusting fast enough to catch up with the true average peak times. A balance must be achieved between creating falsely high classifications with insignificant adjustments, and disenfranchising competitors with adjustments that are too aggressive. Initial PST analysis for 2019 indicated a change from 6 to 12 seconds for some divisions. After review of the analysis, the changes will be 5.5 seconds for Rimfire Rifle Iron Division (RFRI), 4 seconds for Rimfire Rifle Open (RFRO) and Pistol Caliber Carbine Open Divisions (PCCO), and 3 seconds for Pistol Caliber Carbine Iron Division (PCCI). No adjustments are more than 1 second for any stage in any division, and range between .06 and .25 seconds per string.